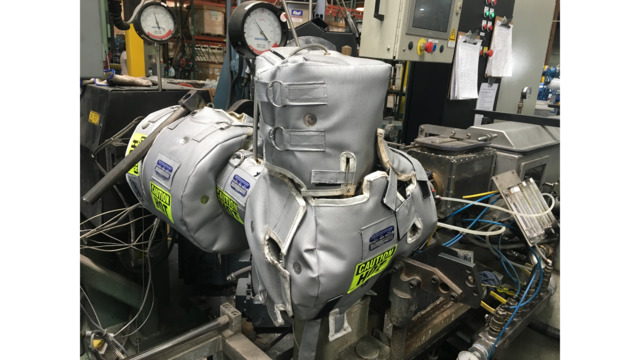 When a manufacturer set out to make its Fresno, Calif., workplace safer for operators of one of its extrusion lines, it reaped an unexpected, additional reward — energy savings that were expected to pay for the project in one year.

“Worker safety was our primary objective when we installed the thermal blankets on the extruder line,” said Chuck Eisenhauer, plant manager of NDS Inc., which makes stormwater-management and irrigation products and is based in Woodland Hills, Calif. “We quickly learned that covering our line’s extruder heads with removable, reusable insulation blankets saved energy.”

NDS supplies a wholesale network and sells its consumer brands, such as Raindrip, through Lowe’s, Menards, True Value and other retail outlets. NDS is owned by Germany’s Norma Group.

“We did a safety risk assessment on our extruder and realized when our workers swap out pins and dies to manufacture different-size pipe, they get very close to the machine’s extruder heads, which can reach temperatures of 400 degrees Fahrenheit,” Eisenhauer said.

After the blankets were installed, the temperature dropped to 127 degrees Fahrenheit. Heat now is being captured and retained around two Davis-Standard extruders that feed one extrusion line. As a result, the machines’ heaters don’t work as hard to keep the PE they process at its optimal temperature.

“After installing the blankets, we noticed the heaters were cycling on and off more instead of running almost constantly,” he said. “This line is in an unheated and non-air-conditioned building. In the winter, when it’s 40 degrees, the heaters are trying to maintain that high operating temperature. Now, they are on less, so we are using less energy.”

The blankets were made by Shannon Global Energy Solutions, a North Tonawanda, N.Y.-based designer and manufacturer of reusable thermal and acoustic insulation blankets and covers. The deal was arranged by Calpacific Equipment Co., a Richmond, Calif.-based distributor of steam and hot-water equipment systems. Eisenhauer found Calpacific, Shannon’s primary rep in California, through an online search when he was researching the thermal blankets.

It took about six weeks from the time of payment to delivery of the custom-made blankets. NDS workers installed them in the summer of 2018. The blankets are placed over the heater bands, which cover the extruder barrel.

“Installation was very straightforward,” Eisenhauer said. “You can tell which blankets go where by looking at them. For safety reasons, we shut down production to install the blankets because workers are so close to the heated areas for a long time.”

The thermal blankets are held in place by Velcro strips and wire twists and are designed to be easily removed and reinstalled.

“The blankets need to be easy to use or workers won’t bother to reinstall them after removal,” said Pete Kessell, Calpacific’s industrial sales account rep for northern California and western Nevada. He worked with Shannon and NDS on the project.

That has not been a problem at NDS.

Seven thermal blankets cover the heated surfaces of the two extruders. At least one of the blankets has to be removed approximately two or three times a month, Eisenhauer said. The most common reasons for removal are to clean the extruder, or to replace a heater band or thermocouple.

The life expectancy of the blankets is at least 15 years. But Kessell said he knows of an installation in Hawaii that is exposed to the weather and is still in use after 20 years. “They can last a long time,” he said. “Possibly a couple of decades.”

An internal die channel improves melt flow and provides an adjustment for deckles, while the internal rod reduces the size of the edge bead and prevents leaks.
Jan 2nd, 2020
Extrusion

The machine can use up to four tools at once to cut, slot and chamfer inside and out on pipes made from a variety of materials.
Jan 2nd, 2020

Collin upgrades unit with a much more compact die with a melt pump used to create a small film sample, a new camera system and an upgraded infrared-light detection model.
Dec 1st, 2019

Users can follow its analysis to replicate the inputs necessary to produce at maximum efficiency, and run at that high level of efficiency for longer.
Dec 1st, 2019

Model 3000A, appropriate for medical-grade silicone tubes and automotive hoses and seals, allows changes in wall thickness without stopping the line.
Dec 1st, 2019