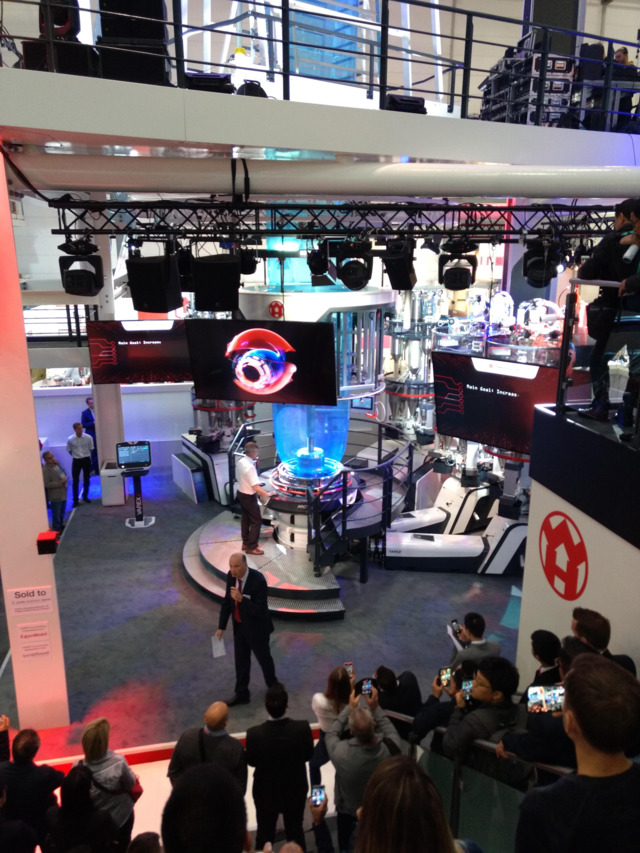 Windmöller & Hölscher’s recent K show innovations included an automation system that system can stop and restart a line in about half the time it takes an experienced operator, as well as the Die Control Wizard (DCW) that automates die adjustments.Bruce GeiselmanTime was of the essence at Windmöller & Hölscher’s booth at K 2019 as the company, which makes machinery for the flexible packaging industry, highlighted two new automated systems designed to cut down on machine starts, stops and changeover times while also reducing waste. The technologies, called Turbostart and the Die Control Wizard (DCW), joined Ruby, a new Internet-of-Things (IoT) system for all film extrusion, printing and converting machinery from W&H, in the spotlight at the booth.

W&H’s Turbostart automation system can stop and restart a blown film line in about half the time it takes an experienced operator, while the DCW automates die adjustments on cast film lines to make width and thickness changes, reducing changeover times and scrap by up to 70 percent.

During demonstrations at the company’s booth, W&H personnel were able to stop and restart a Varex II blown film line with Turbostart in less than 15 minutes. A good operator needs at least 30  minutes for the same process without automation, said Martin Backmann, head of extrusion R&D for W&H.

Film manufacturers routinely stop and start their lines at least once a day and frequently more often when cleaning and maintenance are necessary. “Starting and stopping a line leads to loss of time and quality fluctuations but is unavoidable,” Backmann said. “Our goal was a system that makes the process fast, safe and simple.”

An operator controls Turbostart from the system’s operating panel, and the system’s software automates most of the steps required for shutting down a line and restarting it. The more than 500 manual parameter changes that normally are necessary are reduced to a seven-step process that involves screen clicks.

The short start-up and changeover times enabled by Turbostart reduce the use of raw materials and significantly decrease the amount of waste while maintaining high film quality, according to the company. In addition to speeding up the process, Turbostart also improves operator safety, Backmann said.

“Until now, in order to prevent quality problems caused by air pockets, the operator had to cut the bubble with a knife at the top of the haul-off,” Backmann said. This can pose a risk to safety.

“This is a difficult and dangerous  task because the operator has to be very skilled with the film and with the knife,” Backmann said. “Now, it only takes the press of  a button and it’s done automatically. In addition, we have guided fingers going inside of the film and separating it automatically, and this has never been [done] before.”

While Turbostart is an option on new machines, the company plans to eventually offer a retrofit package for existing lines. 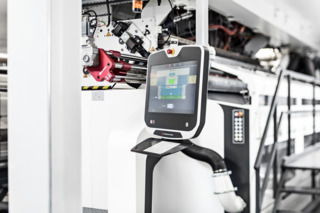 With the Die Control Wizard from Windmöller & Hölscher, an operator simply enters new film parameters into a controller, and die adjustment occurs automatically.Windmöller & HölscherAnother challenge that W&H addressed is a trend toward smaller order sizes, fast job changes and an increasing variety of film properties. The company’s Die Control Wizard (DCW) automation module was specially developed for the company’s Filmex II cast film lines, and the company demonstrated at its booth the advantages it offers over manual die adjustments.

“Previously all cast dies had to be adjusted manually during production or job changes,” said Torben Fischer, head of the cast film division at W&H. “This takes a long time until the desired film profile is achieved. In the end, the speed of the format change depended to a large extent on the experience of the machine operators.”

Without the DCW, product changeovers with conventional equipment involve manual die-bolt adjustments of the cast film die lip at full output until acceptable profile tolerances are achieved. Only then can conventional automatic die control systems be started. The procedure requires skilled operators, is time-consuming and produces large volumes of scrap, according to W&H.

With DCW, an operator simply enters the new film parameters into a controller, and die adjustment occurs automatically.

“With the full automation of the Die Control Wizard, we make a repeatable and consistent film quality possible,” Fischer said. “We achieve the desired film profile faster. All in all, we increase the flexibility and efficiency of our machines enormously and at the same time increase user-friendliness.”

When changing from one production order to the next, the DCW can complete width adjustments within 20 minutes. In the past, similar changes meant up to 90 minutes of manual work, according to the company. 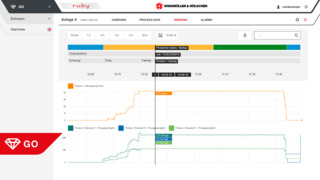 Windmöller & Hölscher's new Ruby software system performs a variety of functions, including live monitoring of extrusion processes and tracking of extrusion products. It offers connectivity to MES and ERP systems.Windmöller & Hölscher KGW&H developed the DCW with Cloeren Inc., an Orange, Texas, manufacturer of extrusion and coextrusion dies. The system consists of software and hardware, including a specially designed die. It is available as an option on new Filmex II extruders and can be installed as a retrofit on existing extruders from W&H and other manufacturers.

In addition to the Turbostart and DCW, W&H also rolled out Ruby, an IoT system that digitizes data and maximizes efficiency and quality production.

Ruby is a software system with extensions for various operations. Depending on the extension, the software can perform a variety of functions, including live monitoring of extrusion processes and tracking of extrusion products. Ruby offers connectivity to MES and ERP systems.

An upgrade of a previous digital information system, Ruby features a user-friendly interface that displays all data involving a customer’s W&H machinery.

“Since the ’90s, W&H has had a central, digital information system called ISP, which many customers have used to collect and display production and process data,” said Wolfgang Hoffmann, head of extrusion software services at W&H. “Ruby automatically evaluates this data and is the basis for additional digital services to further optimize these processes.”

The value of Ruby is its ability to link data with process knowledge. With the extensions,  Ruby offers enhancements for each specific type of machine.

“As an example, Ruby supports extruders using algorithms to evaluate production data, analyze trends and define thresholds for good production, which the system then monitors for adherence,” Hoffmann said.

Ruby then can link production data with data from the lab and downstream processes, he said. Its ability to use data to optimize process parameters improves productivity and product quality. Data-based error detection and alarms translate into greater efficiency, less waste and less downtime.

Production data is tracked and securely stored. It can be used anytime and anywhere to optimize an organization’s processes, according to the company. 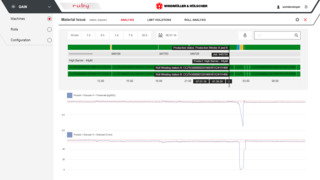 Windmöller & Hölscher's new Ruby software system performs a variety of functions, including live monitoring of extrusion processes and tracking of extrusion products. It offers connectivity to MES and ERP systems.Windmöller & Hölscher KGData collected by Ruby can be viewed through a user interface that is accessible online from personal computers, laptops or tablets by an unlimited number of users.

Collin upgrades unit with a much more compact die with a melt pump used to create a small film sample, a new camera system and an upgraded infrared-light detection model.
Dec 1st, 2019

Planeta had blast before founding firm

Bob Cree got into the plastics industry by accident 33 years ago, but the breakthroughs that he and his company achieved were well-planned.
Aug 14th, 2019

Zed pressure former has 2 chambers, can make 2 products at once