Companies are shopping for machinery as they plan for steady or increased business in the new year, according to a survey conducted by PMM.

Despite a slowing global economy, concern about a possible recession and lingering trade disputes, plastics processors are optimistic about the future, and their equipment purchasing plans for 2020 reflect that outlook, according to a survey conducted by Plastics Machinery Magazine. 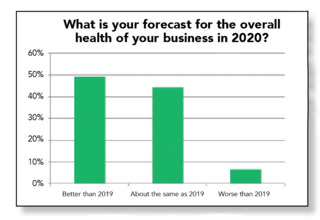 PMMThe survey was emailed in October 2019 to active PMM print and digital subscribers in the U.S. who are plastics processors. Of the 136 people who responded, 60 percent reported that their companies plan to buy primary processing equipment in 2020. The size of the investments ranged from less than $1 million (44 percent) to more than $10 million (11 percent), and just over half said that figure is an increase over 2019. Twenty-five percent are adding new processing capabilities, while 60 percent are replacing existing equipment and 69 percent are expanding their manufacturing capacity.

Auxiliary and automation equipment are also on manufacturers’ shopping lists, with 63 percent of respondents planning to invest in auxiliary equipment. Only 7 percent of those are planning to spend less than in 2019, and 29 percent have budgeted more than $100,000 for auxiliaries.

Half of respondents expect to invest in robots or other automation equipment; 97 percent of them plan to spend the same or more than they did in 2019. Reasons range from replacement (41 percent) to expansion (60 percent) and more automation of current programs (56 percent).

Optimism also was reflected in the fact that 49.2 percent of PMM survey respondents believe business will be better for their companies in 2020, and 44.3 percent expect it to remain the same; only 6.5 percent think business will be worse. 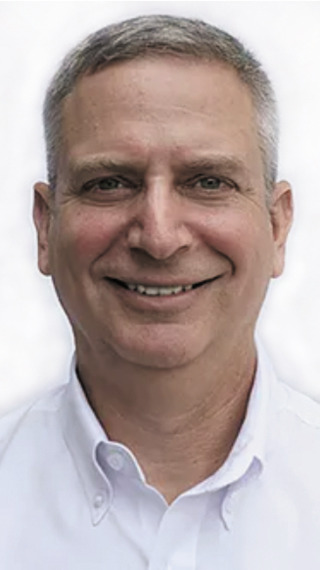 “Some of it is growth from an economic standpoint, but more of it is increased market share within specific customers. And we’re seeing some of our customer base who used to have a lot of internal manufacturing doing more outsourcing.”

“There are projects that we’re working with our customers, and we do have a couple of new customers who could become much more significant for us,” Cavalco said. “So, it’s not really necessarily an increase in our existing capacity based on existing parts. It’s really new projects and new parts that were in development with the customers, and then new tooling that the customers are committing to that will increase the amount of plastic parts that we’re manufacturing in calendar 2020.”

Perc Pineda, chief economist of the Plastics Industry Association, Washington, said the results from the PMM survey mirror those from the association’s business outlook survey conducted in June. “The optimism in that survey for the next six months to the next 12 months remains positive, although it wasn’t as strong as the year before,” he said, and while there was some softness in U.S. manufacturing in 2019, the demand for plastics has been stable.

“This big fear that plastics machinery production would be downward-sloping for quite some time seemed to have reversed in the third quarter,” Pineda said. After a 27.6 percent decrease in the first quarter, shipments of primary equipment increased 8.2 percent in the second quarter, and fell by just 0.5 percent in the third, as reported by the association’s Committee on Equipment Statistics.

“If you look at two years past, the main concern then, and even early this year, was we couldn’t make plastics machinery fast enough for our consumers. So, they were ramping up production, particularly in 2018. And then we have the tariffs that was thrown in the mix, and so then local production was even more stressed in the first six months of this year.”

Based on the association’s models, Pineda predicts a 0.8 to 1 percent increase in machinery shipments this year.

“Part of the reason for that is the optimism is driven by the idea that whatever trade friction we have would somehow be resolved at some time next year [in 2020],” he said, speaking late in 2019. Imports of machinery dropped in the first three quarters of 2019, he said, “and so with limited supply coming into the United States, the next thing that they would really have to do is to increase production to cover for those imports that we were not able to import [in 2019].”

The replacement of old machinery and addition of new equipment, particularly for product development, are also expected to drive sales. The association expects an increase of 2.5 percent in shipment of plastics industry products this year, “and so that needs to be supported by a stable supply of machinery,” Pineda said.

“I’m not surprised at all that your survey turned out to be optimistic, although I’m not expecting stellar growth. We probably won’t see a 3 percent or 4 percent or 5 percent growth,” he said, adding, “I hope I’m wrong, because if things are better, it’s good for the industry.”

Linda Campbell, VP of sales for Entek, a Lebanon, Ore., manufacturer of twin-screw extruders, said she agrees with the general optimism. “We started off 2019 a little slow. We were a little surprised by that. However, in Quarter 3 and Quarter 4 especially, things have just really picked up, and picked up in a substantial way. So, we’re actually going to make up our shortfall from the beginning of the year in the last half of the year.”

She said Entek’s customers are “very busy and feeling more confident, and their orders are certainly coming in. … And on pretty big projects, too,” such as turnkey services and larger machines for high-volume, continuous production.

“We’re seeing lots happening with packaging, medical, sheet suppliers and some masterbatch folks,” Campbell said, and the company is getting orders from a mix of existing and new customers.

“At the beginning part of the year the word on the street, at least from my circle of industry friends, was that it was going to be a year of keeping their current equipment running well, investing in a lot of wear parts and maybe some retrofits, and we weren’t going to see a lot of real capital, big new pieces of equipment. So, we were kind of ready to align with that. But it certainly has changed.”

Glenn Frohring is the president of Worcester, Mass.-based Absolute Haitian Corp., which sells Chinese-made Haitian injection molding machines in the U.S. “This was the first full year of us being exposed to a tariff situation,” he said. “But, looking at where we’re at through three quarters of the year, through September, our business was maintained. So, I was pretty pleased.

“We’ve increased market share in a slower machinery sales environment. And I think that was really positive. … Going into 2020, I think that gives us a real positive outlook.”

David Preusse, president of machinery OEM Wittmann Battenfeld Inc., Torrington, Conn., said his company had a “super year” in 2019. “We had an extraordinary volume of micro-molding machine systems in innovative medical projects, a great year in molding machines machinesproc, and while robots fell slightly, our downstream automation systems were up.”

Preusse cited a number of factors that could affect sales this year. They include the slowdown in the European market, the upcoming U.S. presidential election, the drop in new injection molding machine sales in 2019 and environmental concerns about plastic waste. “I don’t expect growth necessarily,” he said, “but some years to be flat is really excellent business. And if we actually see growth, I will be very pleased.”

The majority of respondents, 57 percent, said their companies utilize injection molding. Thirty-five percent are involved in making or repairing molds and tooling. The third-most-common activity is additive manufacturing, at 21 percent. Blow molding; compounding; film or sheet extrusion; pipe, profile or tube extrusion; recycling; and thermoforming each represent between 14 and 18 percent of the processes performed by respondents’ companies. (Respondents could select more than one process.) The companies were fairly evenly distributed across the range of annual sales revenue, with 28 percent under $5 million and 29 percent over $100 million.

One-quarter of respondents who planned to invest in primary equipment said they were doing so to add new processing capabilities such as 3-D printing. Pineda said the process’ learning curve has taken some time, dampening wide acceptance for it.

“It’s almost like everyone realizes that it’s probably going to have a bigger role in the future ... but no one is making a huge amount of investment to transition into it or make it a part of whatever process they have at the moment.” For some processors, 3-D printing still is used only for product development.

“In terms of customization for particular parts and products, we’re not seeing that in the market,” he said. But customization of manufacturing is a trend he consistently sees included in five-year forecasts by economists and industry experts, “and, if we get to the point that it’s widely practiced, then we would probably see more engagement in 3-D printing and additive manufacturing. But, at the moment, it’s still, I would say, at an infant stage.”

Cavalco’s injection molding company began using Carbon additive manufacturing technology last January for prototyping, beta testing and short manufacturing runs. “Our customers are really getting a better idea of the capabilities of the technology. So, we do have some parts that we will never cut tooling for. Then there are other parts where we’re just doing the first production runs on the Carbon. And then as volumes increase, it becomes more economically feasible to cut a tool and to injection mold the parts.

“Most of our investment in the upcoming calendar year will be in the more standard injection molding equipment that we currently buy,” he said. “But we are doing more investigation on additional types of additive technologies that would really support our customer base and help us break into new accounts.”

“It has made things more complex with the ever-changing environment from a tariff standpoint, but for the most part we really haven’t seen a significant impact other than I do think more companies are looking at producing the parts in North America vs. elsewhere,” Cavalco said.

“Trade friction, particularly within the U.S. and China, has actually caused different effects on our members,” Pineda said. Processors who rely on parts and manufacturing components from China and other countries are being hurt by tariffs, while those that don’t rely on foreign components are benefiting.

Frohring said, to make up for the effect of the tariffs, Haitian has worked to lower the cost of its machines. “Everybody’s optimistic that the tariffs are going to go away. But … I don’t see it going away that quick.”

Circularity may be tough sell to US plastics industry

Herrmann Ultrasonics has launched the second-generation of its HiQ line of ultrasonic welders, which includes the Supreme and Precision units.
Jan 2nd, 2020

Aicon SmartScan R12 now offers a 12-megapixel camera that lets it more easily work with difficult surfaces, such as those that are dark or glossy.
Jan 2nd, 2020

The IMLWatcher vision system checks the position of the labels each cycle, and the B4’s label magazine automatically adjusts to correct for any misplaced labels.
Jan 2nd, 2020

Plasticating system can be retrofitted to IMMs