Rapid Granulator engineers took a fresh look and found that by varying rotor speed, the technology is a lot more useful.

“Our first step was to find out why 25 rpm was the standard, and we eventually discovered it on a Japanese patent application from years ago,” Rapid CEO Bengt Rimark said. “It seemed no one ever questioned it.”

Rapid figured out through extensive testing that brittle material can be granulated better at 15 rpm. The company also measured torque, noise and dust.

“We were very surprised,” Rimark said.

The research led to Rapid’s new OneCut Pro granulator, shown for the first time at K 2019, after an 18-month development process. Rimark predicted it will be a very popular beside-the-press granulator for injection molders.

By providing a range of speeds instead of limiting users to only 25 rpm, the slow-speed granulator is more versatile and can handle a wider range of materials.

Running at 15 rpm, the OneCut Pro improves the quality of ground brittle materials and minimizes dust. Noise level is reduced by 3 to 5 dBa, or about 50 percent, when rotor speed is reduced from 25 rpm to 15 rpm, Rapid said. DBa, or A-weighted decibels, is a measurement of how loudly sounds are perceived by the human ear. 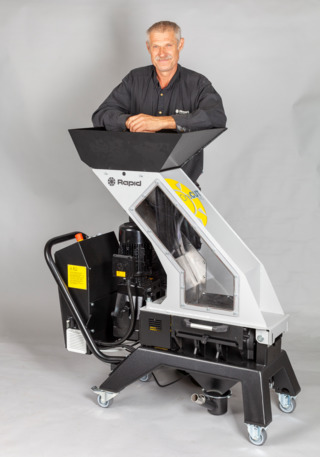 By running at slower-than-typical speeds, Rapid's new OneCut Pro granulator reduces noise, energy consumption and dust.Rapid Granulator ABThe company said reducing the speed by 40 percent results in an energy savings of about 30 percent. “That is a significant savings,” Rimark said.

Most granulators are run at less than full capacity, Rapid said.

Speed can be increased to 35 rpm to accommodate larger amounts of material. “Moving from 25 rpm to 35 rpm increases capacity of the granulator by 30 to 40 percent,” he said.

The torque level of the granulator stays constant regardless of the rotor speed.

Rapid Granulator developed the FlexiSpeed system, which uses a frequency converter to let the user adjust speed based on the material.

The OneCut Pro is equipped with EnergySmart, a new system that lets the operator stop the machine as material is fed into it, rather than having it run continuously. Rapid said this can reduce energy consumption by up to 80 percent.

It also uses Rapid’s Stop & Go technology, which lets the machine granulate in intervals to further save energy.

“Granulators generally have five to six times more capacity than an injection molder needs,” Rimark said. “This function lets the machine remain stopped until the bin is full, then it starts itself.”

Another new feature is the Quick Rotor Release, which lets an operator quickly release the machine’s gearbox from the rotor. This makes cleaning or servicing the free-spinning rotor easier and faster. An open-heart design facilitates access to the cutting chamber and gearbox. The complete machine can be opened in less than 30 seconds, Rapid said.

The cutting chamber is modular and designed to make service and repairs easier. The cutting teeth make a square cut to generate uniform regrind, Rapid said.

An anti-blocking system is standard. It prevents overloads and rotor blocking and can also stir the material in the cutting chamber by regularly reversing the rotor’s direction.

The standard motor is 2.2 horsepower (hp) and a 3-hp model is available.

An optional hopper-mounted metal-detection accessory is also available. It stops the rotors before metal reaches the cutting chamber.

Gneuss has beefed up the drive on its Gneuss Processing Units, the company’s high-performance extrusion lines.
Bruce Geiselman
Oct 21st, 2019

Designed for use in automated systems that sort waste, including plastics, Smart Gripper can be retrofitted on any Heavy Picker robot arm unit from ZenRobotics.
Aug 30th, 2019

Following the money to machinery, recycling

The AQC-1 and AQC-2 recycling sorting systems from Bulk Handling Systems combine the company’s Max-AI VIS, or Visual Inspection System, with FlexPicker robots from ABB Inc. that can remove designated materials or colors of items from the recycling stream.
May 15th, 2019